In 2016 I wrote a post entitled “Ultra-Processed Foods Contribute Half Of The Calories And 90% Of The Added Sugar to US Diets.’

In the last week, I have discovered two excellent discussions further supporting the role these ultra-processed foods (UPFs) play in our obesity epidemic

Brazil Leads In Recognizing The Dangers of Ultra-Processed Foods

Last week The Guardian published a long article which does a great job of providing an easily digested background to the concept of UPFs and their influence on obesity. A lot of that background comes from the work of a Brazilian MD, Carlos Monteiro:

The concept of UPFs was born in the early years of this millennium when a Brazilian scientist called Carlos Monteiro noticed a paradox. People appeared to be buying less sugar, yet obesity and type 2 diabetes were going up. A team of Brazilian nutrition researchers led by Monteiro, based at the university of Sao Paulo, had been tracking the nation’s diet since the 80s, asking households to record the foods they bought. One of the biggest trends to jump out of the data was that, while the amount of sugar and oil people were buying was going down, their sugar consumption was vastly increasing, because of all of the ready-to-eat sugary products that were now available, from packaged cakes to chocolate breakfast cereal, that were easy to eat in large quantities without thinking about it.

I highly recommend you read the full article in the Guardian on this important topic. It is extremely well-written  and the author has interviewed both Monteiro and Kevin Hall for the piece.

If your time is limited, I give you what I wrote in 2016 but which appears never to have been publicly published.

I’ve been meaning to follow up on some recent evidence showing the major role that the sugar industry played in vilifying fat and obscuring the dangers of excess sugar in the diet.

Here are two items to help you further understand this process:

Carlos Monteiro and his colleagues begin this paper by noting that dietary guidelines are increasingly recommending limiting added sugar to <10% of dietary calories because of evidence that:

The study analyzed the relationship between processed food consumption, total calories and calories from added sugar using data from the National Health and Nutrition Examination Survey 2009–2010.

They divided foods into four categories:

–unprocessed or minimally processed foods (such as fresh, dry or frozen fruits or vegetables, grains, legumes, meat, fish and milk)

–processed culinary ingredients’ (including table sugar, oils, fats, salt, and other substances extracted from foods or from nature, and used in kitchens to make culinary preparations)

–processed foods’ (foods manufactured with the addition of salt or sugar or other substances of culinary use to unprocessed or minimally processed foods, such as canned food and simple breads and cheese)

–ultra-processed foods (formulations of several ingredients which, besides salt, sugar, oils and fats, include food substances not used in culinary preparations, in particular, flavours, colours, sweeteners, emulsifiers and other additives used to imitate sensorial qualities of unprocessed or minimally processed foods and their culinary preparations or to disguise undesirable qualities of the final product.

ultra-processed foods account for 58% of  all calories in the US diet, and contribute nearly 90% of all added sugars.

The second item about UPFs was an episode of the podcast Best Known method which featured the NIH nutrition researcher Kevin Hall discussing ultra-processed foods with Ethan Weiss.

The early part of the podcast reviews Hall early training in physics and mathematics and transition into mathematical modeling of metabolism. Ultimately he ended up testing the hypothesis that a diet of UPF with similar macronutrient composition would result in greater weight gan than an unprocessed diet

The results were published in Cell Metabolism last year and are summarized in this neat graphic. 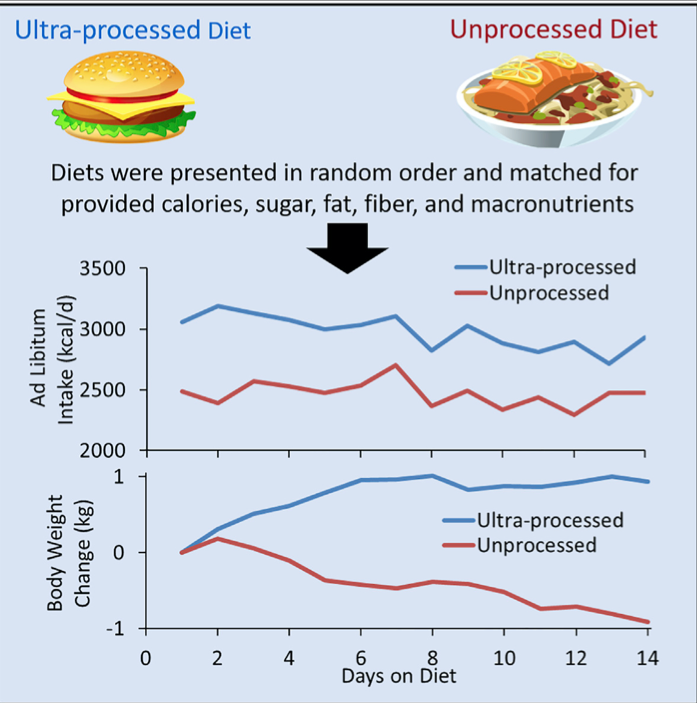 Yes. you read that correctly.

Hall had expected negative results from this study but now believes something about UPFs beyond their macronutrient composition causes many individuals to overeat and gain weight. Whereas in 2016 I thought the major culprit was the added sugar in UPFs, Hall’s study suggests it is not just added sugar or missing fiber in the diet that is leading to excess eating and weight gain.

I provided some guidance on identifying UPFs in my unpublished 2016 post:

If you have difficulty in determining what  foods should be considered  ultra-processed   I recommend  getting a copy of Michael Pollan’s small and delightful booklet, “Food Rules: An Eater’s Manual.”

Some of the key rules:

Don’t eat anything your grandmother wouldn’t recognize as food.

And one that I particularly like as it emphasizes the misleading health claims of low fat diary:

Avoid food products with the wordoid “lite” or the terms “low-fat” or “nonfat” in their names.

N.B. As I indicated in “I Am a Keto-friendly cardiologist and I Love Keyto” “I have tremendous professional respect for Ethan Weiss, the cardiologist behind Keyto.  It is ironic that he announced at the beginning of his Best Known Method podcast with Kevin Hall that Keyto was changing its name to KeyEats and its first products are (seemingly) ultra-processed food bars.