In The Time of Coronavirus What Should Be Considered A Normal Temperature And What Is A Fever?

Multiple studies in the last 30 years have clearly established that the average human temperature has dropped progressively in the last 150 years and is more accurately considered to be 36.8°C (98.2°F).

Moreover, normal temperature varies between individuals and multiple other variables including according to what time of day it is taken.

For example, when I take my temperature first thing in the morning it is 96.4°F. Later in the day, it rises to 97.4°F. After exercise, it reaches 98.0°F. My overall average is 97.0, significantly lower than the canonical average.

This change in the average normal temperature and the upper limits of normal has significant implications for temperature screening for the determination of fever and consequently who may or may not have a coronavirus infection.

The concept of 98.6 as normal can be traced back 150 years to work from the German scientist Carl Reinhold August Wunderlich who made multiple measurements of axillary temperature in 25000 subjects. Wunderlich reported a range of 36.2°C (97.2°F) to 37.5°C (99.5°F). Although he also noted a significant diurnal variation in temperature, with a nadir in early AM and peak in later afternoon,  he would have considered me hypothermic.

Change in Temperature Over Time

Studies since Wunderlich have shown a progressive decline in the average human temperature. Mackowiak, et al, (PDF available here) published  data showing a substantially lower normal human temperature such that  that 98.6 “should be abandoned as a concept relevant to clinical thermometry.”

Mackowiak, et al found in 148 individuals the average temperate was 98.2 (36.8). These individuals were monitored over a 48 hour period and the average and range varied considerably 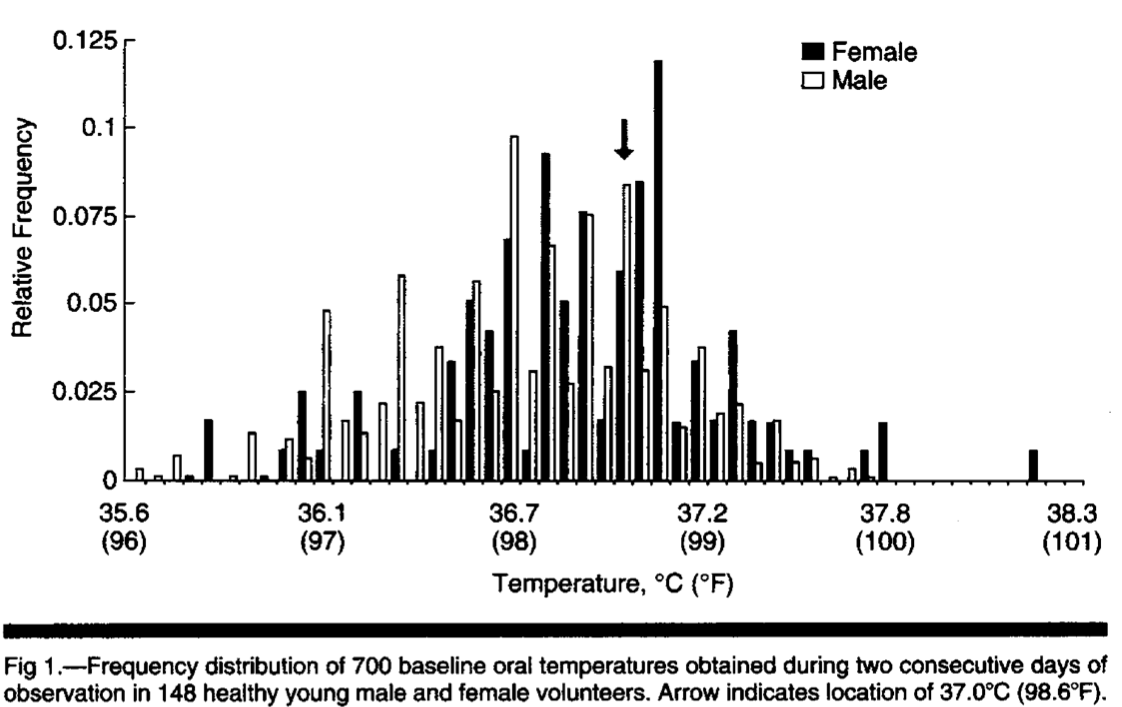 The average temperature varied according to time of day. 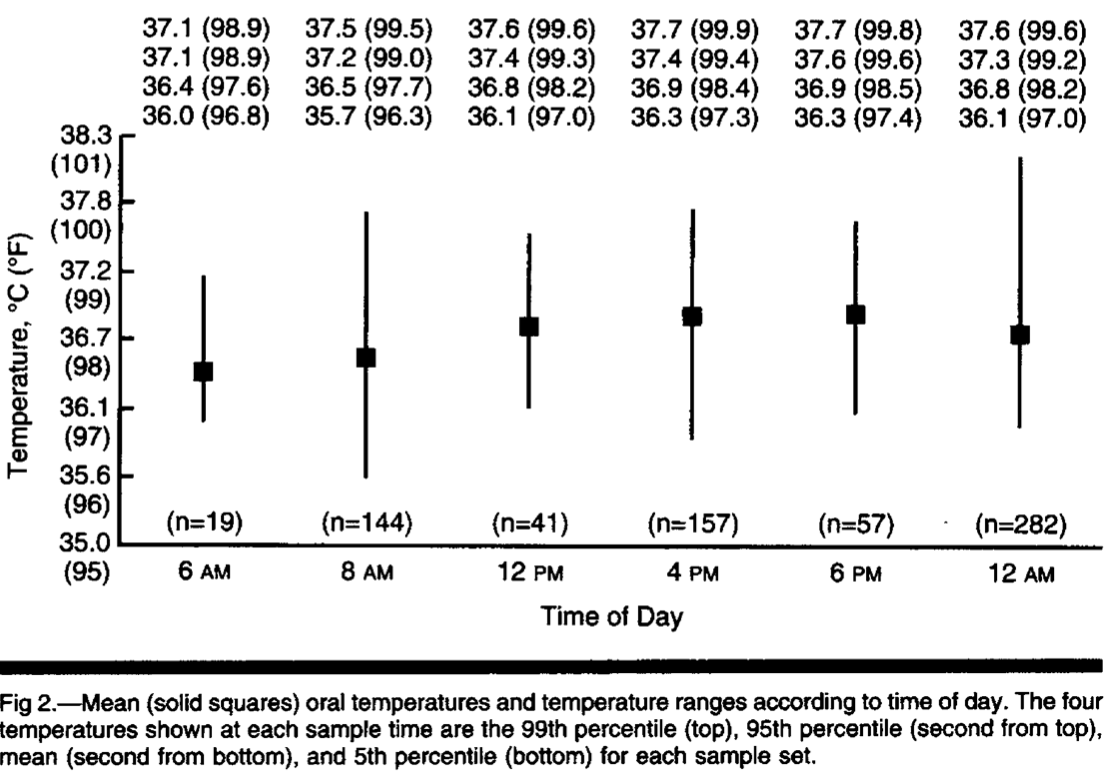 In the graph above if we look at 6 AM temperature measurement, we see the average is actually 97.5°F. My 6 AM recordings of 96.4°F puts me in the bottom fifth percentile. More importantly, 99% of subjects had a temperature of <98.9°F.

A publication from earlier this year in eLife confirmed that the average temperature in humans is progressively dropping.

mean body temperature in men and women, after adjusting for age, height, weight and, in some models date and time of day, has decreased monotonically by 0.03°C per birth decade.. 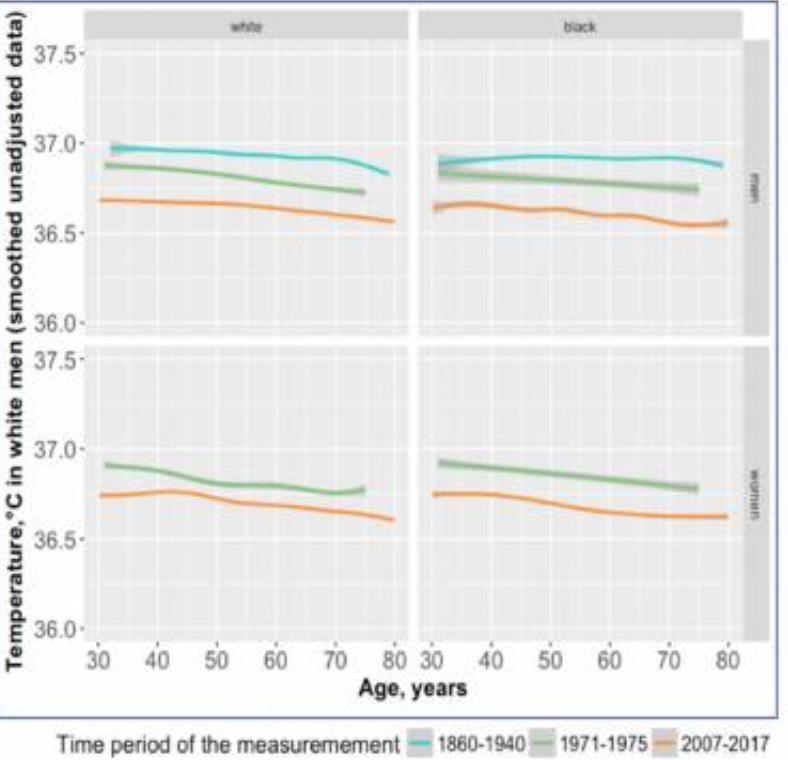 As you can see from the graph above, the average temperature has dropped from the 1970s to the 2000s. The most recent temperatures from 2007 to 2017 in orange lie consistently below the green temperatures from 1971 to 1975. This is irrespective of gender (men in top two graphs, women in bottom two) and race (white in left boxes, black in right boxes.)

All of this temperature variation data would be simply of academic interest but given the COVID-19 pandemic, the definition of fever has become incredibly important.

If we choose a cut-point that is too high we risk missing cases. If we choose one too low we risk overwhelming the limited testing resources and unnecessarily alarming patients.

What I have decided to do is to establish a norm for myself based on time of day. If I record a temperature >1.8 °F over my norm I will consider myself as having a fever.

Clearly, this doesn’t work for widespread screening of the public which is occurring now at multiple sites as most individuals have not established what is their normal average temperature, let alone their average temperature by time of day.

At a minimum, though, it seems to me that public health authorities should recognize the lower normal average temperature and the corresponding lower cut-point fever that has been known since 1997.

Adjusting the cut-point to >99.8°F for abnormal would align more closely with what is currently known about the range of normal human temperatures.

22 thoughts on “In The Time of Coronavirus What Should Be Considered A Normal Temperature And What Is A Fever?”