The skeptical cardiologist has been planning a post on “The Greatest Urban Bike Ride” since last summer. The GUBR (pronounced goober) as I whimsically term it begins near Mooney Park near my house in University City, travels along the quiet, tree-lined Ivy League avenues of University Park (the largest private subdivision in the state of Missouri) and through a secret passageway near tiny (and now closed) Lewis Park (which features a fish on a bicycle sculpture in its pond).

Upon emerging from the secret passageway one beholds University Heights which is on the National Register of Historic Places.

In 1902, Edgar Gardner Lewis, the enigmatic publisher and founder of University City purchased  85 acres just northwest of the construction site in Forest Park for the Louisiana Purchase Exhibition, aka the 1904 St. Louis World’s Fair and created a planned community-an exclusive “Residence Park.”

Meandering down the winding streets of University Heights on a 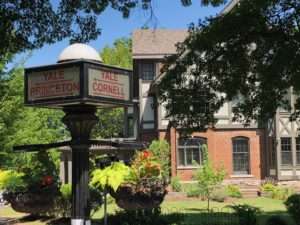 bike is a great way to appreciate the variety of architecture, cool street signs and unique land-hugging design of the lots and streets.

Eventually, the GUBR leaves University Heights and after crossing Delmar Boulevard (using a roundabout!) at the entrance to the legendary Delmar Loop (“The Delmar Loop is a buzzing entertainment and dining hub with an eclectic mix of noodle bars, BBQ restaurants, Korean and Mexican eateries, cocktail lounges and pubs lining Delmar Boulevard. Well-known locals with stars on the St. Louis Walk of Fame include Maya Angelou and Betty Grable, as well as Chuck Berry, whose statue is nearby. Music venues like the Pageant and Delmar Hall stage rock, roots and indie gigs”) it traverses more beautiful city streets in Ames Place. 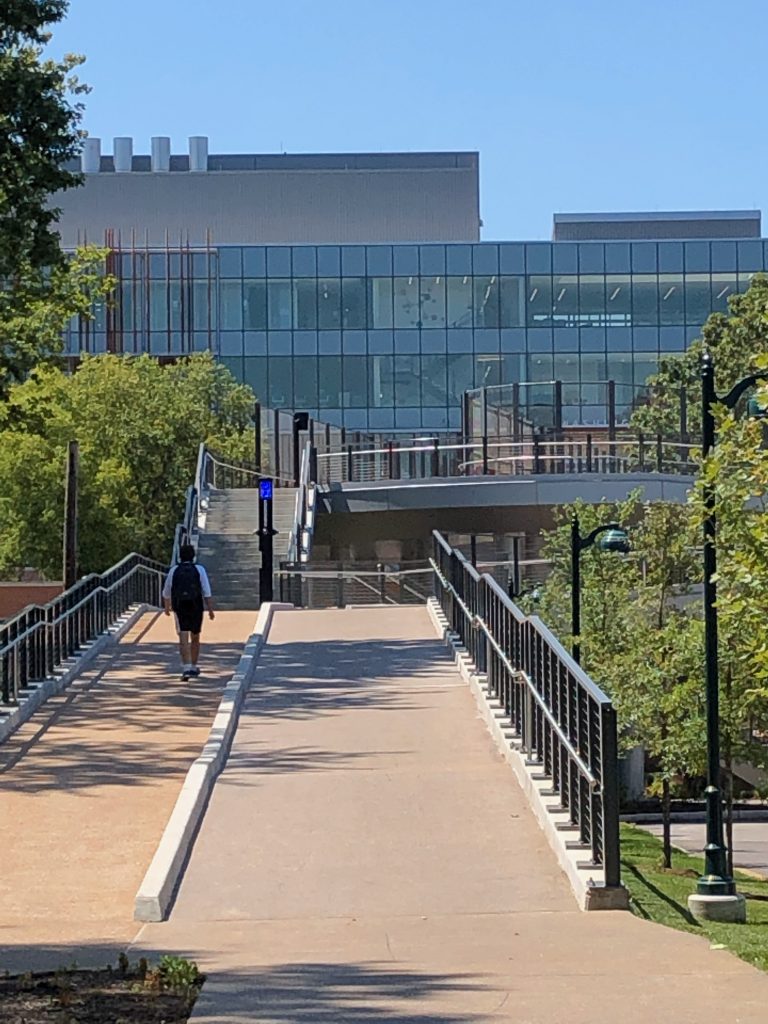 Three of my children attended Washington University so I feel like I’ve contributed personally to the majority of the buildings there. After many ill-fated rides across the campus (I have discovered that riding a bike on stairs yields poor outcomes) I discovered a short and simple route (using ramps!) which takes me to Forsyth Blvd a few blocks from Forest Park.

Forest Park is the sparkling gem at the center of the GUBR and miraculously it is still open. Whereas St. Louis County has closed all of its parks, from massive Queeny and Greensfelder to tiny Lewis Park of fish-on-bicycle fame, the city of St. Louis (which is not within St. Louis County strangely enough) has left open its parks.

I whole-heartedly agree and an open Forest Park has done wonders for my psyche.

Krewson has made some modifications to enhance social distancing in the parks which make sense:

“We have closed down playgrounds because it’s really not safe having your kids on that playground equipment,” Krewson said. “We’ve closed down court sports like tennis, and basketball, and pickleball, and handball.”

Krewson also shut down one-third of the streets in city parks to create more space for walking and biking while abiding by social distancing boundaries.

“We’ve closed some of the streets in our big parks,” Krewson said. “We want those streets to be available for walkers. So that if you’re walking, it’s very easy for you to stay six feet apart if you’re walking down a street that’s closed.”

Once I reach Forest Park I ride the bike trails around the periphery, often stopping at a bench (I’ve labeled position #4 on the map below) positioned between bucolic Jefferson “Lake” and the towers of the Barnes-Jewish medical complex.

The round trip from home and back, including the circuit around Forest Park , is about 11 miles which takes me about an hour.

I could go on for hours about the wonders of the GUBR, Forest Park and the great outdoors but the weather is perfect today and I can feel the great T Rex sculpture in Forest Park calling me. 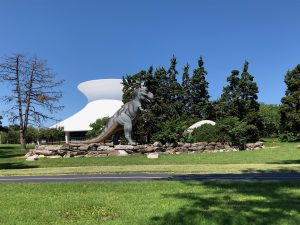 I will be practicing social distancing and If it seems I’m too close to you I will pull my hammer-head shark bandana over my nose and mouth.

If you are wondering why I’m not wearing a bike helmet please read this before yelling at me.

Lewis envisioned the remaining acreage as becoming the first subdivision, University Heights No.1, in “A City Beautiful.”  In 1903, Lewis employed an expert to survey the property to provide him with full measurements, elevations, and topographical features.  He then used this survey to construct a wax model of the landscape and to lay out the curving maze of streets we know today.  Using little tubes, he checked the dimensions for sewers and created mini-rainfalls with a sprinkler system to check drainage.  The streets were laid out so as to hug the contours of the undulating landscape.

The subdivision would be a planned community– an exclusive “Residence Park.”  The lots were drawn in several sizes, with the larger lots at the top of the hillside, near his new headquarters.  In addition, to maintain a standard of design and structural integrity, a certain minimum sum was required to erect a home on each lot size.  The more expensive homes were to be located on the crown of the slope, while less expensive and smaller ones were allowed downhill.  The range of lot sizes allowed for the great diversity of architectural styles of the homes in University Heights, while the varying shapes of the lots, a result of the winding streets, also influenced the type of home that could be erected to fit the space.  Only Dartmouth and Princeton offer relatively straight views down the street.  The winding inner streets, which sometimes confuse even long-time residents as well as visitors, offer ever-changing vistas that contribute greatly to the character of the neighborhood.