Subclinical Atrial Fibrillation-Seek And Ye Shall Find, But What Then?

For those of us over age 55 years there is a lifetime risk of developing atrial fibrillation (AF) of 37%. and with AF comes a 5 fold risk of stroke which can be reduced by oral anticoagulant therapy.

Because up to 25% of AF is asymptomatic investigators have recognized a need to screen for AF in high risk individuals with the goal of reducing stroke. When AF is found in individuals without symptoms by screening or from monitoring a patient’s pacemaker it is termed subclinical atrial fibrillation (SCAF.)

Two presentations at the 2018 American College of Cardiology Meeting in Orlando shed some light on the problem of SCAF.

The mHealth Screening To Prevent Strokes (mSTOPS) study took a novel  approach to identifying and enrolling patients. Working with Aetna, invitations were sent by email or snail mail to over a 100,000 Aetna members who did not have a diagnosis of AF and who were over age 74 year or younger but with CHADS2 risk factors.

The members were directed to a website for information on the the trial and were guided through an enrollment process for informed consent. Half were randomized to early monitoring and half delayed monitoring at 4 months.

Immediate monitoring involved the patient being mailed a 14 day patch type monitor (Zio Patch, iRhythm Technologies Inc.) within 2 weeks of consenting to the trial. Patients in the delayed monitoring group received the patch 4 months after consent.

Patients in the immediate or early monitoring group were 9 times more likely to have AF diagnosed than those in the delayed group (prior to them wearing the Zio)).

Diagnosis of AF in these participants were then compared to 5,310 observational controls matched for age, sex and CHADS-VASc score who did not undergo screening.

At the end of one year 6.3% of the monitored group had been diagnosed with AF versus 2.8% in the observational controls, a highly significant 3 fold increase in AF detection.

More patients in the monitoring group were started on therapy and had more testing done (at the discretion of their physicians who were informed of the results at the patient’s discretion).

There was no difference in stroke, MI or systemic thromboembolism at one year between the two groups but clearly this study was underpowered and nonrandomized so differences would have been unlikely and if present hard to interpret.

Does Manner of Detection of AF Matter

AF detected by screening and AF detected only by implanted devices share many similarities. For both, if we seek them we shall find them (one study showed in patients with no history of AF undergoing new pacemaker implantation during a mean follow-up period of 596 ± 344 days, 77 (29%) patients had at least one AF episode lasting ≥ 5 min.

At another session at ACC18 two EP doctors debated whether  a high stroke risk individual with 9 minutes of an atrial high rate episode (AHRE) of presumed AF detected by pacemaker should receive anticoagulation.

-Unlike clinical AF we have no randomized controlled trial data supporting treatment with oral anticoagulants for DDAF.

(Of note, funding for many studies in this area comes from either makers of monitor devices like the Zio patch (iRhythm) used in mStops or the Medtronic loop recorder used in LOOP which detect SCAF or makers of the blood thinners doctors would be prescribing if SCAF is detected (like Janssen the maker of Xarelto.))

I haven’t learned the answer to the 3 key questions I posed at the beginning of this post since 2018 but more information continues to emerge.

For example, the ongoing Danish LOOP (Atrial Fibrillation Detected by Continuous ECG Monitoring) study is a randomized, controlled trial, randomizing subjects who are ≥70 years of age and have ≥1 of the following stroke risk factors: hypertension (HTN), diabetes, heart failure, or previous stroke, in a 1:3 ratio to receive an implanted loop recorder (ILR) (Reveal LINQ; Medtronic, Dublin, Ireland) with continuous electrocardiographic monitoring via the CareLink Network, or to standard of care.

The early results published late last year are fascinating and worthy of more detailed discussion. Briefly, 35% of participants had SCAF lasting>6 minutes. However, the AF burden was low, and progression was limited. In addition, symptoms were scarce, and the heart rate was only modestly elevated during SCAF.

This graph shows the time course of AF (blue bars) before and after a first AF episode >24 hours. Contrary to the idea that AF gets progressively more frequent with longer episodes, the natural history of AF in these patients varied wildly. Many had no prolonged episodes for  months before or after the first prolonged AF episode. 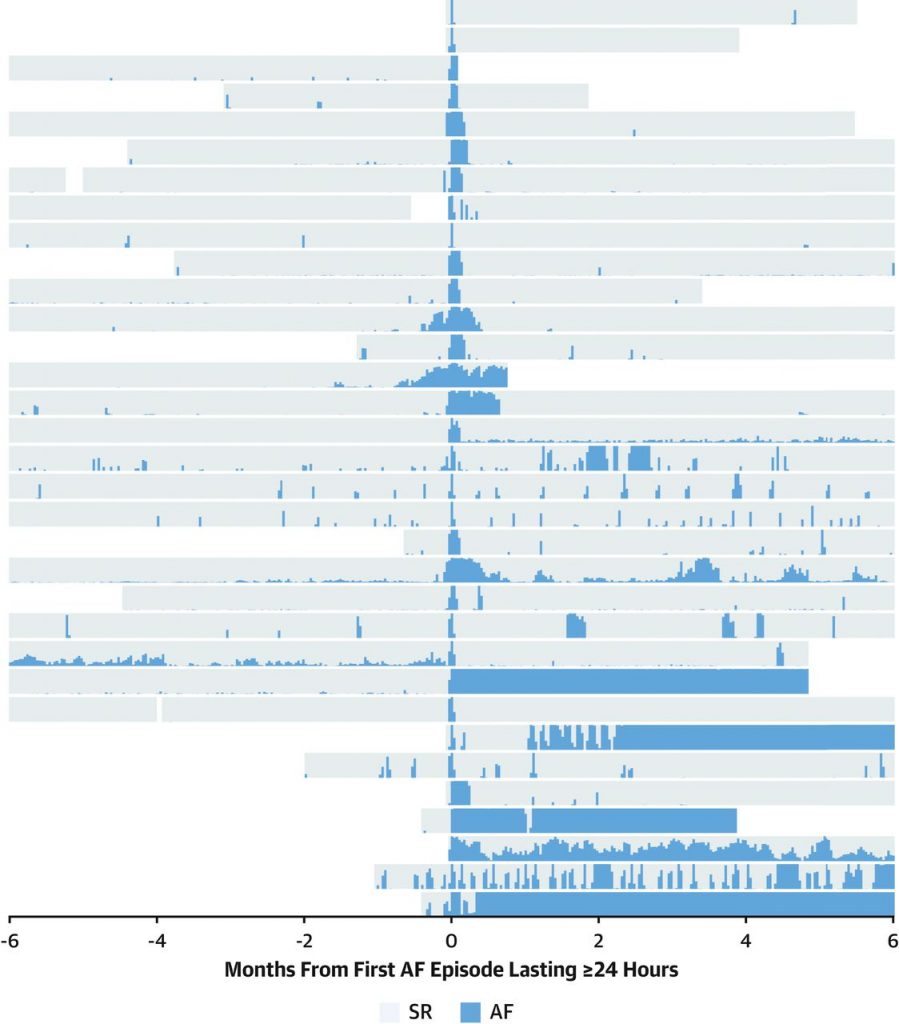 The final results of this study will tell us if seeking SCAF is worthwhile in reducing cardiovascular morbidity and mortality.

I see patients daily with brief episodes of AF detected by their pacemaker of which they are completely unaware. Currently, after a discussion with the patient about the risks and benefits of anticoagulation in this situation I will offer the option of anticoagulation if episodes >24 hours are noted, recognizing the lack of scientific studies to guide us.

Ideally, patients with <24 hours of DDAF will be enrolled in ongoing randomized trials which will give us the correct answer to these difficult questions. Similarly, we desperately need randomized studies on the effects of screening for AF on long term outcomes.