Can We Learn From History? The Tulsa Race Massacre, The Deadly Philadelphia Parade, and Covid-19

The skeptical cardiologist is in Broken Arrow, Oklahoma this Father’s Day weekend visiting Pops Pearson after a 2 week quarantine and a 6 hour drive. As fate would have it, we are not too far from the BOK Center in nearby Tulsa, where MAGA supporters have been queuing up since Thursday night in anticipation of President Trump’s campaign rally there today.

Tulsa’s local news has become national news as yesterday there were peaceful gatherings celebrating Juneteenth in the Tulsa Greenwood area and today it becomes the epicenter of Trump’s reelection campaign, and perhaps the epicenter of COVID-19 resurgence.

Despite growing up in nearby Bartlesville and visiting Tulsa frequently over the years, until recently I was unaware of the horrible atrocities committed in the Greenwood area in 1921.

The New York Times yesterday published an article entitled “The Burning of Black Wall Street, Revisited” which provides details on what is now also termed the Tulsa Race Massacre.

” in the prosperous black district of Greenwood, white vigilantes systematically torched nearly 40 square blocks. Gone in the blink of an eye were more than 1,000 homes, a dozen churches, five hotels, 31 restaurants, four drugstores and eight doctors’ offices, as well as a public library and a hospital. As many as 9,000 black Tulsans were left homeless. Photographs from the period depict shellshocked survivors being marched at gunpoint to temporary concentration camps. 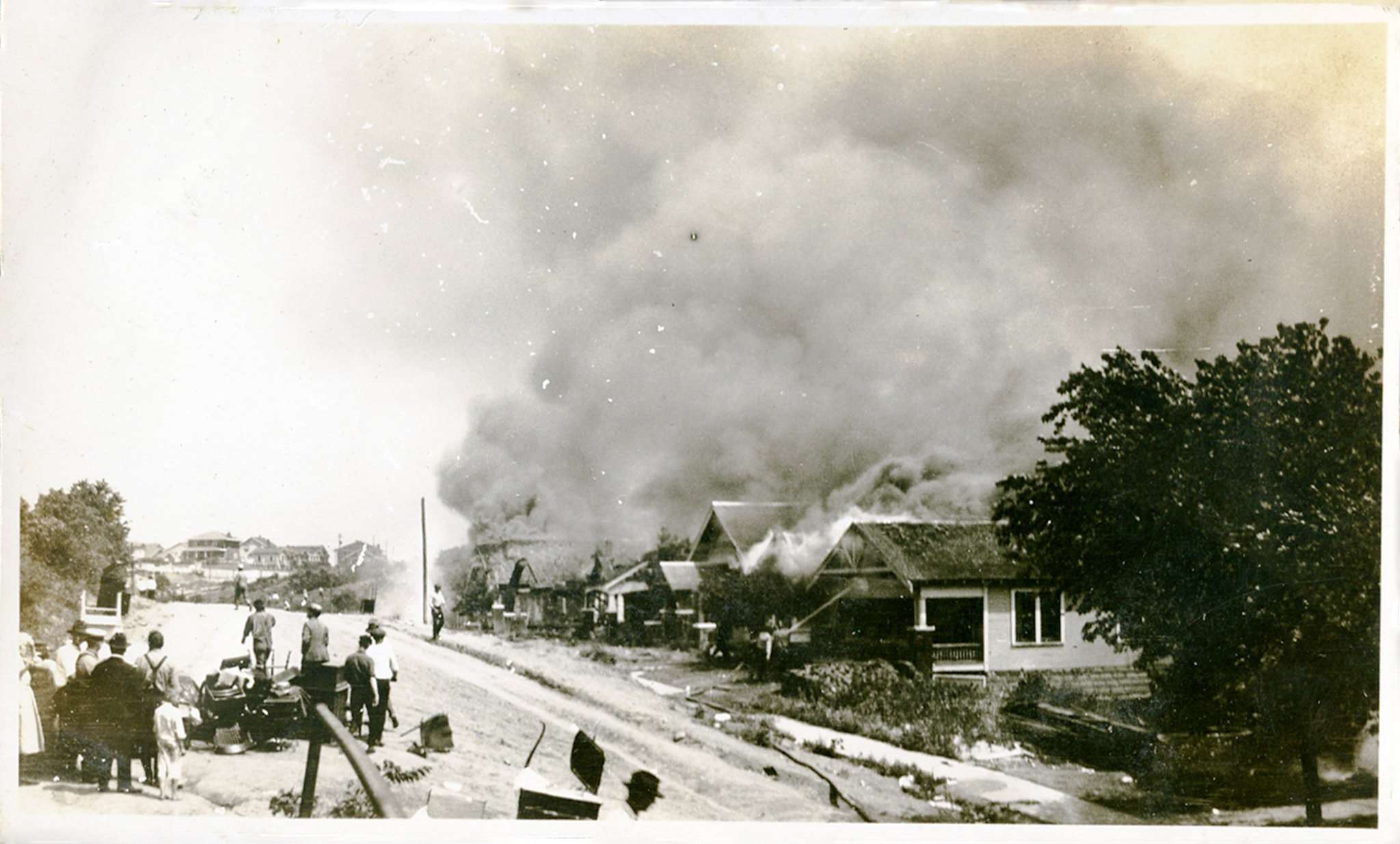 For unclear reasons, Donald Trump has decided to have a campaign rally today about a mile from Greenwood, and in a state and city facing an uptick in COVID-19 cases.

Below is the most recent graph of cases from Tulsa County’s health department: 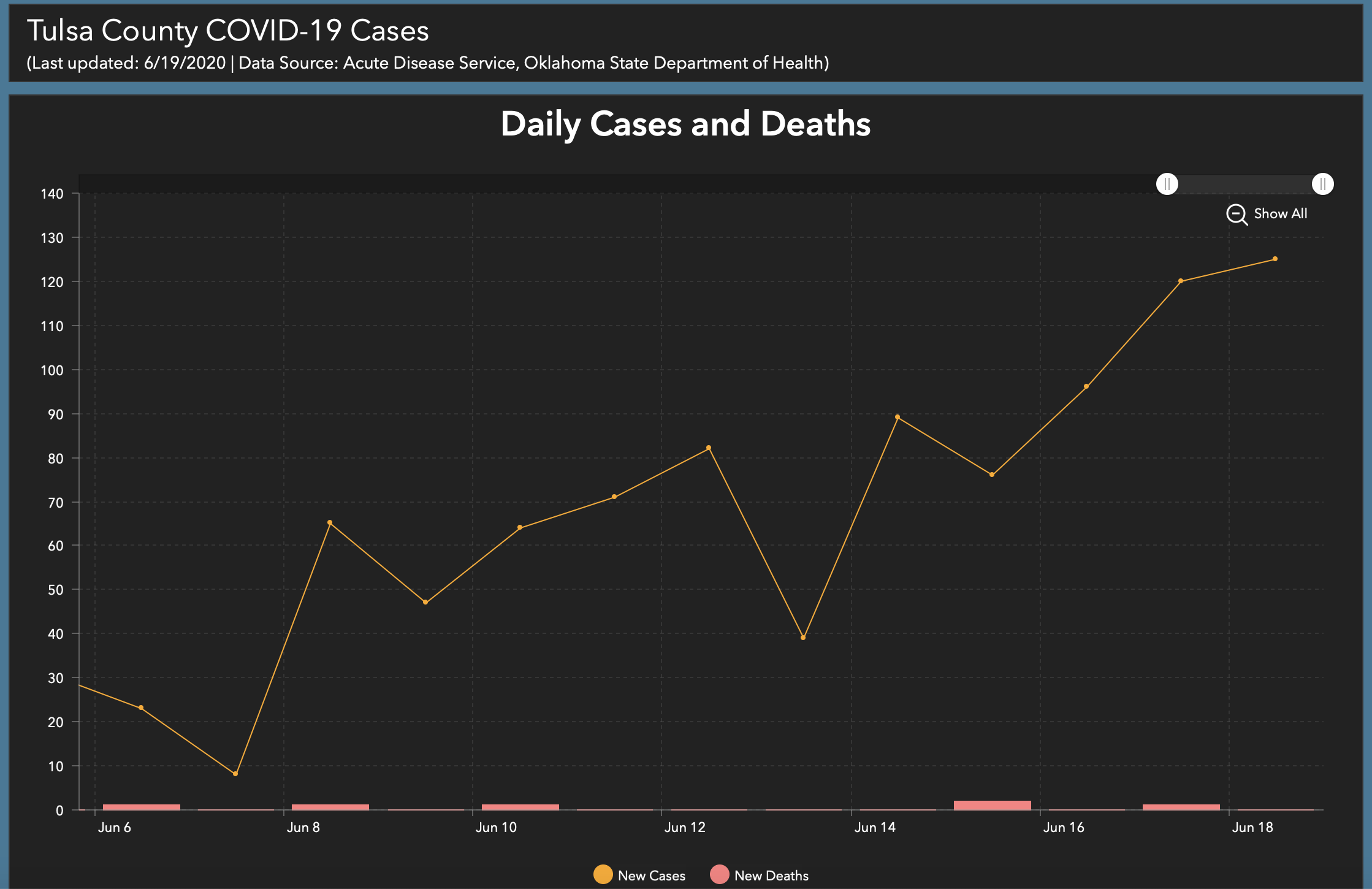 As USA Today noted, the Governor of Oklahoma seems unaware of the recent rise in cases and is confident that Oklahoma has safely reopened.

Oklahoma cases of COVID-19 rose by 450 on Thursday, blowing past the record 259 daily cases reported on Wednesday, as the surge of infections continued ahead of a massive rally for President Donald Trump and demonstrations set for this weekend in Tulsa.The Oklahoma State Health Department’s daily update showed Oklahoma City added 80 cases and Tulsa added 82, as the state’s total rose to 9,354. There were two additional deaths, raising the total to 366. The figures were released not long after Gov. Kevin Stitt participated at a roundtable at the White House and told Trump that Oklahoma was “one of the first states that has safely and measurably reopened.” “Oklahoma is ready for your visit,” the governor said. “It’s going to be safe and everyone’s really really excited.”

An opinion piece in the Tulsa World suggests “No matter how you feel about it, Saturday’s rally in Tulsa matters to us all:”

“Trump’s rally has turned Tulsa into a giant medical experiment with tremendous political implications. At issue is whether 19,000 people can be packed into an arena for hours on end while thousands more mingle in streets and parks outside without spreading COVID-19 and multiplying the deaths and debilitating aftereffects.

If they can, the lid almost certainly will come off. Concerts and sports events — and political rallies — will be back in business, no matter what public health officials say.

But if they can’t, the lid is likely to come down hard.

For Trump, the rally could be a wash, just another event among many.

Or, if things go well — if the crowds are large and adoring, if the incalculables go in his favor, if there is no associated COVID-19 spike — it could launch him toward a second term.

But if things don’t go well — if an acceleration of COVID-19 is traced to the rally, if even two or three people who contract it die, if there is violence that adheres to the president — it could be a turning point in the other direction.”

The Deadliest Parade in American History

My wife has been reading John Barry’s “The Great Influenza: The Story of the Deadliest Pandemic in History” and has pointed out to me several times the significance of a parade that took place in Philadelphia in accelerating the transmission of the Spanish Flu.

Per Wikipedia the “Philadelphia Liberty Loans Parade” was a parade in Philadelphia, Pennsylvania, on September 28, 1918, organized to promote government bonds that helped pay for the needs of Allied troops in World War I. More than 200,000 Philadelphians attended the parade, which led to one of the largest outbreaks of the Spanish Flu in the United States. It has since been declared the “deadliest parade in American history.”

At the height of World War I, history’s most lethal influenza virus erupted in an army camp in Kansas, moved east with American troops, then exploded, killing as many as 100 million people worldwide. It killed more people in twenty-four months than AIDS killed in twenty-four years, more in a year than the Black Death killed in a century

Barry concludes, “The final lesson of 1918, a simple one yet one most difficult to execute, is that…those in authority must retain the public’s trust. The way to do that is to distort nothing, to put the best face on nothing, to try to manipulate no one. Lincoln said that first, and best. A leader must make whatever horror exists concrete. Only then will people be able to break it apart.”

N.B. More history we should be aware of:

Per Wikipedia, “Broken Arrow’s name comes from an old Creek community in Alabama. Members of that community were expelled from Alabama by the United States government, along the Trail of Tears in the 1830s. The Creek founded a new community in the Indian Territory and named it after their old settlement in Alabama. The town’s Creek name was Rekackv (pronounced thlee-Kawtch-kuh), meaning broken arrow. The new Creek settlement was located several miles south of present-day downtown Broken Arrow.”

….and something that Trump’s Tulsa visit has brought to the forefront:

“Juneteeth commemorates the end of slavery in the United States, when Union troops at the end of the Civil War reached Galveston, Texas, on June 19, 1865, to inform African-Americans there of the Emancipation Proclamation, which had been issued two years before.”

27 thoughts on “Can We Learn From History? The Tulsa Race Massacre, The Deadly Philadelphia Parade, and Covid-19”