Revisiting Who Should Take Aspirin

This is my 2018 post updating guidance on aspirin usage in light of the ASPREE trial. It includes a detailed look at the study and was inadvertently deleted as I put together my post on the draft 2021 USPSTF recommendations for aspirin usage.

I’ve gotten lots of questions in the last few days from patients  who have had coronary stents in the past questioning whether they should stay on aspirin.

The answer is YES!.

If you have had a stent stay on aspirin unless your cardiologist says it is OK to stop.

Four years ago the skeptical cardiologist wrote the (in his extremely humble  and biased opinion) the definitive post on aspirin and cardiovascular disease.  Entitled “Should I take aspirin to prevent stroke or heart attack“,  it pointed out that although Dr. Oz had recently told almost all middle-aged women to take a baby aspirin and fish oil, there was, in fact no evidence to support that practice.
The publication of the ASPREE (Aspirin in Reducing Events in the Elderly) trial results in the latest issue of the New England Journal of Medicine further strengthens the points I made in 2014.
Between 2010 and 2014 the ASPREE investigators enrolled over 19,000 community-dwelling persons in Australia and the United States who were 70 years of age or older (or ≥65 years of age among blacks and Hispanics in the United States) and did not have cardiovascular disease, dementia, or disability.
(It’s important to look closely at the precise inclusion and exclusion criteria in randomized studies  to understand fully the implications of the results (for example, what qualified as cardiovascular disease) and I’ve listed them at the end of this post.)
Study participants were randomly assigned to receive 100 mg of enteric-coated aspirin or placebo. At the end of the study about 2/3 of participants in both groups were still taking their pills.
When I wrote about aspirin in 2014 I focused on cardiovascular disease. At that time, there was some reasonable evidence that aspirin might lower the risk of colorectal cancer. But when we look at outcomes the bottom line is how the drug influences the overall mix of diseases and deaths.
The ASPREE researchers chose disability-free survival, defined as survival free from dementia or persistent physical disability (inability to perform or severe difficulty in performing at least one of the six basic activities of daily living that had persisted for at least 6 month) as their primary end-point which makes a lot of sense-patients don’t want to just live longer, they want to live longer with a good quality of life. If aspirin, to take a totally hypothetical example) is stopping people from dying from heart attacks but making them demented it’s not benefiting them overall.
After 5 years there was no difference in the rate of death, dementia or permanent physical disability between the aspirin group (21.5 events per 1000 person-years) and placebo group (21.2 per 1000).
However those taking aspirin had a significantly higher rate of major bleeding (3.8%) than those taking placebo (2.8%).
The risk of death from any cause was 12.7 events per 1000 person-years in the aspirin group and 11.1 events per 1000 person-years in the placebo group.. Cancer was the major contributor to the higher mortality in the aspirin group, accounting for 1.6 excess deaths per 1000 person-years. 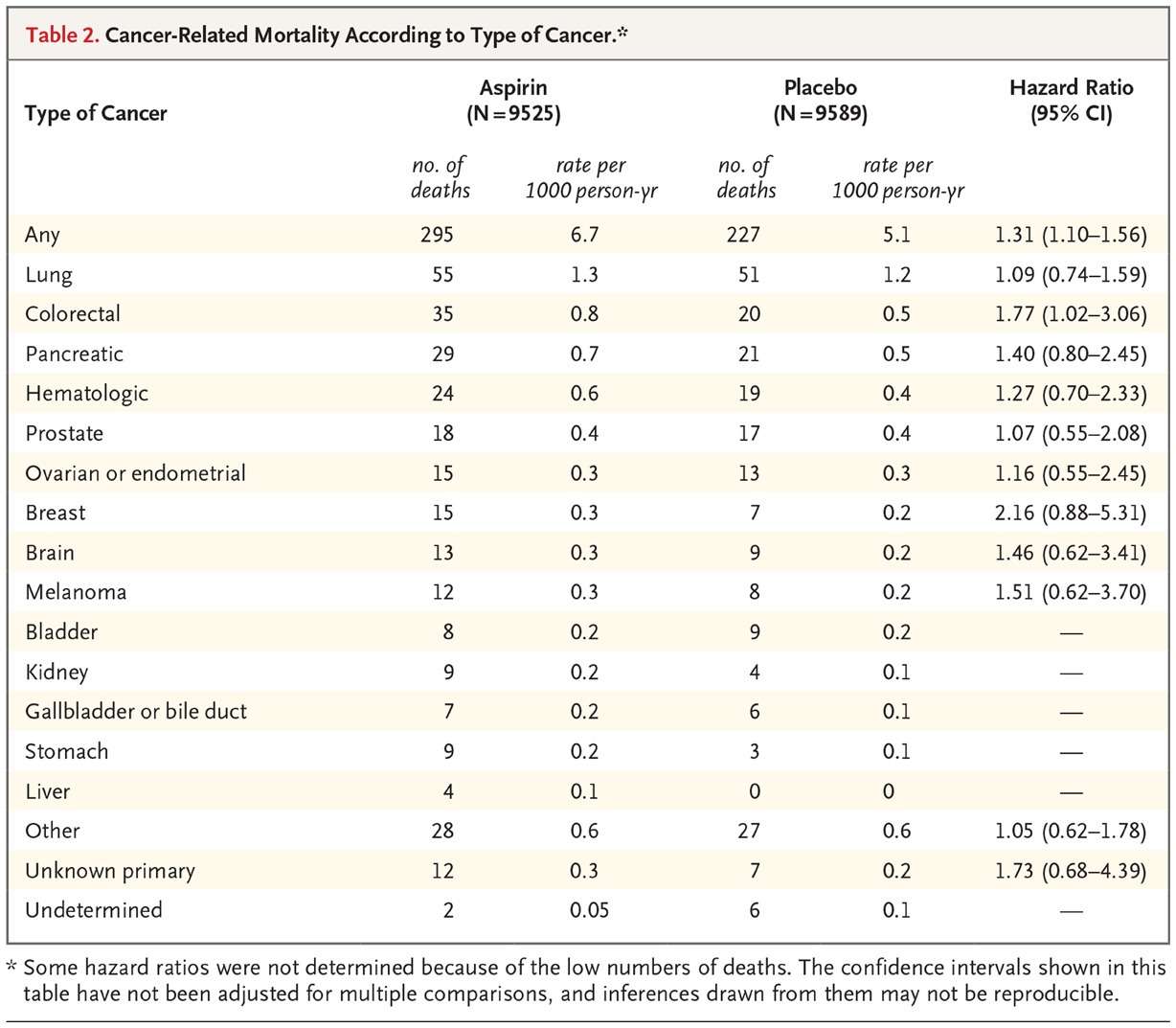 No. It did not.
A separate paper analyzed cardiovascular outcomes

The ASPREE study confirms what I advised in 2014 and hopefully will further reduce the inappropriate consumption of aspirin among low risk individuals.
I’ve taken more patients off aspirin since 2014 than I’ve started on and what I wrote then remains relevant and reflects my current practice. Especially in light of the increase cancer risk noted in ASPREE patients should only take aspirin for good reasons.
Below is my 2014 post entitled “Should I Take Aspirin To Prevent Heart Attack or Stroke.”
Aspirin is a unique drug, the prototypical  two-edged sword of pharmaceuticals. It t has the capability of stopping platelets, the sticky elements in our blood, from forming clots that cause strokes and heart attacks when arterial plaques rupture, but it increases the risk of serious bleeding into the brain or from the GI tract. Despite these powerful properties, aspirin is available over the counter and is very cheap, thus anyone can take it in any dosage they want.

Who Should Take Aspirin?

For the last five years I’ve been advising my patients who have no evidence of atherosclerotic vascular disease against taking aspirin to prevent heart attack and stroke. Several comprehensive reviews of all the randomized trials of aspirin had concluded by 2011 that

The current totality of evidence provides only modest support for a benefit of aspirin in patients without clinical cardiovascular disease, which is offset by its risk. For every 1,000 subjects treated with aspirin over a 5-year period, aspirin would prevent 2.9 MCE and cause 2.8 major bleeds.
(MCE=major cardiovascular events, e.g. stroke, heart attack, death from cardiovascular disease)

Dr. Oz, on the other hand, came to St. Louis in 2011 to have  lunch with five hundred women and advised them all to take a baby aspirin daily (and fish oil, which is not indicated for primary prevention as I have discussed here). When I saw these women subsequently in my office I had to spend a fair amount of our visit explaining why they didn’t need to take aspirin and fish oil.
After reviewing available data, the FDA this week issued a statementrecommending against aspirin use for the prevention of a first heart attack or stroke in patients with no history of cardiovascular disease (i.e. for primary prevention). The FDA pointed out that aspirin use is associated with “serious risks,” including increased risk of bleeding in the stomach and brain. As for secondary prevention for people with cardiovascular disease or those who have had a previous heart attack or stroke (secondary prevention), the available evidence continues to support aspirin use.

As I’ve discussed previously, however, many individuals who have not had a stroke or heart attack are walking around with a substantial burden of atherosclerosis in their arteries. Fatty plaques can become quite advanced in the arteries to the brain and heart before they obstruct blood flow and cause symptoms. In such individuals with subclinical atherosclerosis aspirin is going to be much more beneficial.

Guided Use of Aspirin

We have the tools available to look for atherosclerotic plaques before they rupture and cause heart attacks or stroke. Ultrasound screening of the carotid artery, as I discussed here, is one such tool: vascular screening is an accurate, harmless and painless way to assess for subclinical atherosclerosis.
Coronary calcium is another, which I’ve written extensively about.
In my practice, the answer to the question of who should or should not take aspirin is based on whether my patient has or does not have significant atherosclerosis. If they have had a clinical event due to atherosclerotic cardiovascular disease (stroke, heart attack, coronary stent, coronary bypass surgery, documented blocked arteries to the legs) I recommend they take one 81 milligram (baby) uncoated aspirin daily. If they have not had a clinical event but I have documented by either

then I recommend a daily baby aspirin (assuming no high risk of bleeding).
There are no randomized trials testing this approach but in the next few years several large aspirin trials will be completed and hopefully we will get a better understanding of who benefits most from aspirin for primary prevention.
Until then remember that aspirin is a powerful drug with potential for good and bad effects on your body. Only take it if you and your health care provider have decided the benefits outweigh the risks after careful consideration of your particular situation
Acetylsalicylically Yours,
-ACP

26 thoughts on “Revisiting Who Should Take Aspirin”