Why Doesn't The USA Have Graphic Warning Labels On Cigarette Packs Like The Netherlands?

While strolling the delightful (and typically debris-free) streets of Haarlem in The Netherlands the skeptical cardiologist espied an unusual cigarette pack on the ground. 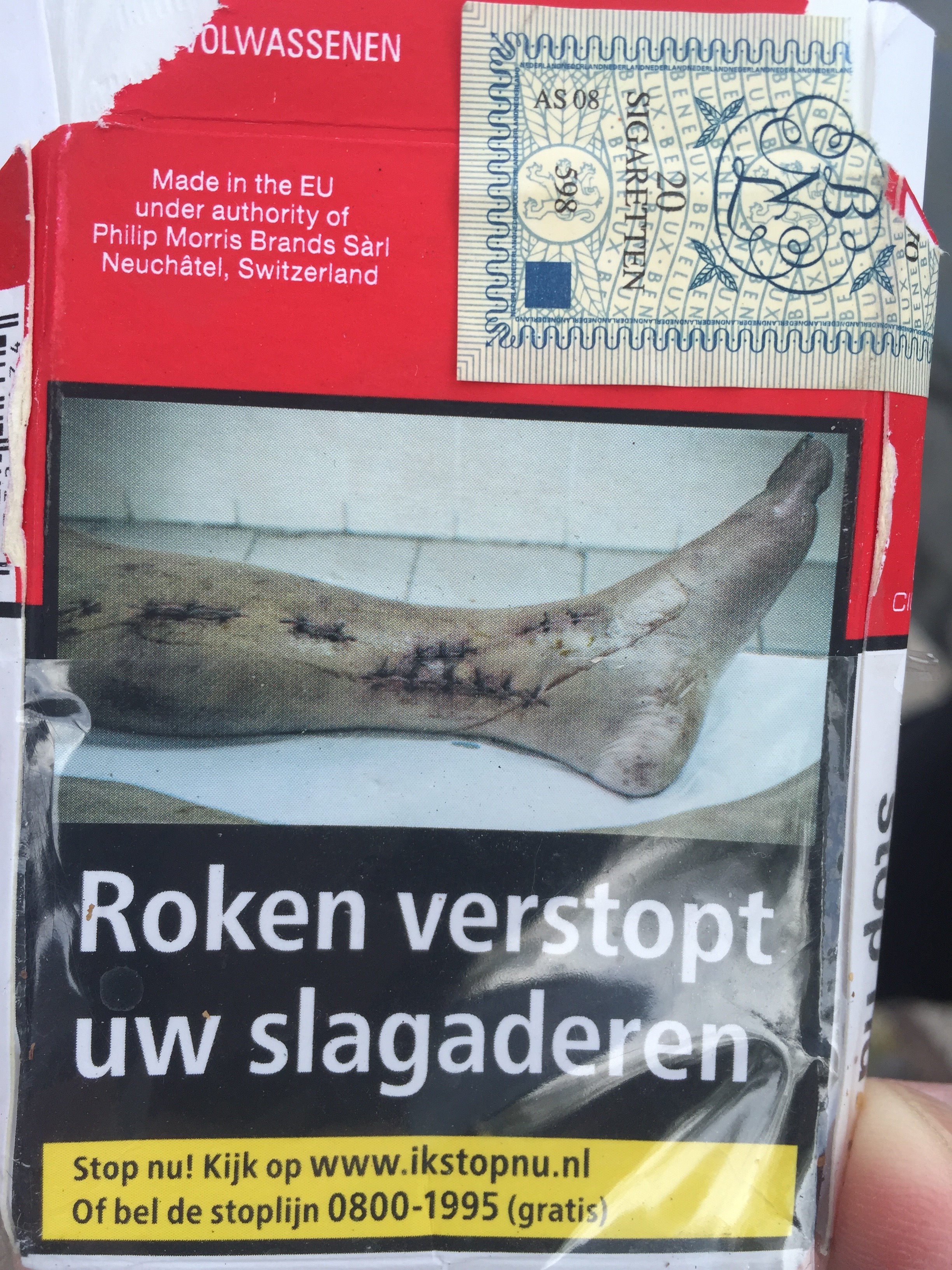 In comparison to the typical American cigarette pack I noted a very prominent and disgusting picture of a leg which had been ravaged by peripheral artery disease.
The large print translates “smoking clogs your arteries.”
This is one of many potential warnings on Dutch cigarette packs. My favorite is
Roken kan leiden tot een langzame, pijnlijke dood
(Smoking can lead to a slow, painful death)
Perhaps, if such warning had been on American cigarette packs in the 1990s my mother would have been able to walk without severe pain in her legs (claudication) from the severe blockages caused by her decades of cigarette smoking.
When cigarette smoking patients tell me that “you have to die from something” I tell them that although they are greatly increasing their chance of dying from lung and cardiac disease, the smoking may not kill them but  leave them miserable and unable to walk or breath.
Experts on tobacco control note that these large, graphic and direct warnings are much more effective than the first small boxed warnings:

After the implementation of the first warning labels in 1966, the FTC’s 1981 report concluded that the original warning labels were not novel, overexposed and too abstract to remember and be personally relevant.46 Warning labels, like advertisements, wear out over time.47 Written warning labels wear out faster than graphic ones.48,49 In response, Congress passed a law mandating four rotating warnings. Studies on them began appearing in the late 1980s, demonstrating that several years after the implementation, those written labels on cigarette packs were also not noticed and not remembered by smokers and adolescents.50–53 Since then, the diffusion and evolution of tobacco warning labels have been propelled by observational and experimental studies showing the effectiveness of large graphic warning labels in informing consumers about the health harms of smoking and reducing their smoking behavior.45,54

Here’s how Australia’s warnings have evolved 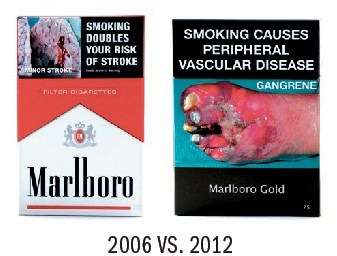 In 2011 the US Congress passed legislation moving America towards such effective graphic warnings:
However, the law was challenged by Big Tobacco and has never been enacted. From the FDA site:

The Family Smoking Prevention and Tobacco Control Act requires the FDA to include new warning labels on cigarette packages and in cigarette advertisements. On June 22, 2011, the FDA published a final rule requiring color graphics depicting the negative health consequences of smoking to accompany the nine new textual warning statements. However, the final rule was challenged in court by several tobacco companies, and on Aug. 24, 2012, the United States Court of Appeals for the District of Columbia Circuit vacated the rule on First Amendment grounds and remanded the matter to the agency.[1] On Dec. 5, 2012, the Court denied the government’s petition for panel rehearing and rehearing en banc. In 2013, the government decided not to seek further review of the court’s ruling.
The FDA has been undertaking research related to graphic health warnings since that time.
[1] R.J. Reynolds Tobacco Co., et al., v. Food & Drug Administration, et al., 696 F.3d 1205 (D.C. Cir. 2012)

What Other Countries Are Doing

According to a Canadian Cancer Society report from late 2016, 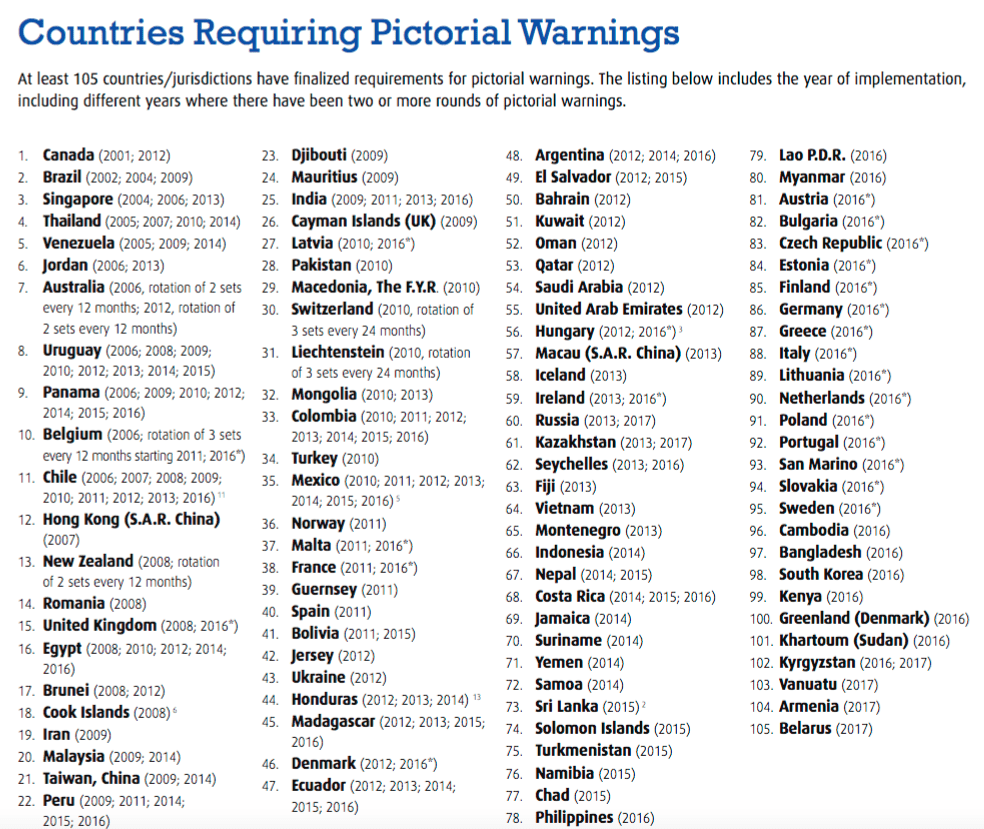 And some of their warning pictures:

And this a picture that FDA would have required: 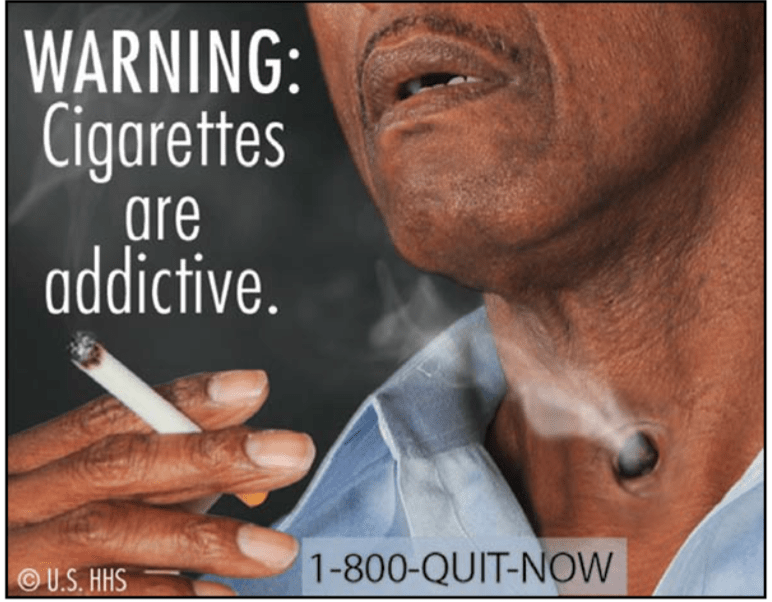 16 thoughts on “Why Doesn't The USA Have Graphic Warning Labels On Cigarette Packs Like The Netherlands?”